Places to See in Dharamshala 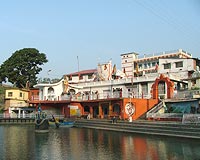 Nestled in the western Himalayas, the hill station of Dharamshala is a visual treat for those intending to sojourn here. Dharamshala with its pine and deodar forests, pure water bodies and snow covered mountains will completely enthrall you. Here you can indulge in trekking or a simple activity like boating in the Dal lake or just a stroll in the woods. Dharamshala is also a favorite destination for those longing for tranquility and spiritual solace. The temples, churches and Buddhist monasteries are also prominent in the hill station and a visit to these is must when halting at Dharamshala. To know more about the sightseeing options in Dharamshala, read the list of places we have given below.

Dal Lake
11 km away from lower Dharamshala and 3 km away from upper Dharamshala is the beautiful Dal Lake. Adjacent to the Tibetan children's village, Dal lake is the starting point of trekking in the region. The oval shaped artificial lake, surrounded by fir trees is a must visit destination of the hill station. A casual stroll around the lake is also immensely enjoyed by tourists visiting Dal lake. The Dal lake every year comes to life in the month of September when an annual fair is held at the banks of the lake.

McLeod Ganj
McLeod Ganj or upper Dharamshala is the current home of spiritual Buddhist leader Dalai Lama. Owing to the development of several monasteries and Tibetan schools at McLeod Ganj, the hill station is also referred to as the 'Little Lhasa of India'. McLeod Ganj is relatively more peaceful than lower Dharamshala and owing to the presence of monasteries and churches will definitely enrich a tourist spiritually. McLeod Ganj is also known for its Tibetan market and has several handicrafts which are made by the Tibetans themselves.

Chamunda Devi
Located at a distance of 15 km from the main town of Dharamshala, Chamunda Devi temple is dedicated to goddess Durga also called 'Chamunda'. The pilgrimage site holds immense reverence for devout Hindus and whenever in Dharamshala people of the faith make it a point to visit the shrine. The shrine also holds significance due to the belief that praying here gives moksha or salvation to one's ancestors. The shrine perched on a hill top gives a breathtaking view of the mountains and the surrounding forests which will surely remain etched in your mind.

Church of St. John In The Wilderness
Situated in the tranquil forest near Forsyth Gunj, the Anglican church is just fifteen minutes of walk away from McLeod Ganj. The British Viceroy Lord Elgin who initiated the development of the Church in Dharamshala died here and is buried in the cemetery close to the church. Built in 1852 the church is constructed in neo-Gothic style and has some superior Belgian stained glass windows. The church is open between 10 am to 5 pm and provides one immense peace of mind on a visit here.

Triund
Triund is a perfect destination for the adventurous lot of people. McLeod Ganj to Triund is a fascinating 9 km trek which involves crossing Rakkar and Dharamkot villages. On this interesting trekking journey one comes across Galu Devi which is a small shrine and a water point. On the way to Triund you will have to pass through jungles of rhododendrons and oaks. Here you can find avian population along with wild goats, black bear and pigs which are also found in the region. Finally on reaching Triund you will find a forest bungalow which was built a few years ago.

Tsuglagkhang
Situated opposite the residence of Dalai Lama, Tsuglagkhang is the central cathedral or the main temple of the Buddhist. The temple houses three main images, that of Sakyamuni Buddha, Avalokitesvara and Padmasambhava. Made of gilded bronze the principal image of Sakyamuni Buddha is about three meter high. The central cathedral is a divine place and provides immense peace of mind and spiritual solace to a visitor.

Dip Thekchen Choeling Monastery
The Dip Thekchen Choeling Monastery is the best place if one intends to know deeply about the Buddhist faith. The monastery stands tall in the pine forests and is visible from a distance due to its golden roof. The first floor of the monastery is a museum with bronze figures, Buddhist images and a collection of mandalas. The library within the monastery has an exhaustive collection of ancient manuscripts, books on Buddhist philosophy, archival photographs on Tibet, prayer scrolls and sacred texts.